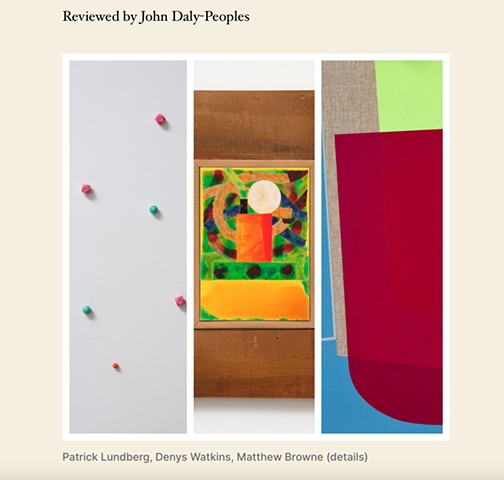 Matthew Browne’s exhibition Moment of Tangency takes a more rigorous approach. In speaking about the artists geometric colour works writer Emil McEvoy notes about the artist that “In Browne’s process, a painting evolves in an unplanned and improvised manner, as each new component – a coloured shape, line or layer – intuitively responds to the former. They unfold one element at a time until a composition comes together where successive lines, forms and planes meet.”The titles of his works generally refer to ideas or concepts it is difficult or impossible to define, attempting to find ways to describe the indescribable or transitory thoughts.

With many of the works the artist has resorted to titles which could gave come from the Dictionary of Obscure Thoughts and Emotions with definitions such “Trumspringa” – the temptation to step off your career track and become a shepherd in the mountains or “Daguerrologue” – an imaginary interview with an old photo of yourself, while the entire series of works titled “Morii” is defined as The desire to capture a fleeting experience. This approach results in paintings which often look like components of a three-dimensional jigsaw, as though there are missing components which if discovered will solve the problem, answer the question and there is a certain cinematic quality to some of the work with bands of colour sliding across the surface.

They can also seem like the components of a fashion designer patterns, seemingly abstract shapes which when combined and assembled in the correct manner result in a complex structure or shape.

His work explores Minimalism through experiments with space and geometry, through the use of colours, exactitude, and precision manipulating images and arrangements of objects in order to challenge the perception of the viewer. It is as though there is a secret language in his work to be discovered.

While there is a conceptual approach with his work this is balanced by a playful and quirky aspect to the paintings with the artist enjoying the spontaneity of assembling collages. The works range from the relatively simple “Socha” ($4500) with two interlocking shapes and “Morii 17” through to the larger and more intricate works such as “Onism” ($18,000) and “Flashover” ($18,000).

While colour contrasts are a major aspect of the show his “Pouri” ($18,000) features a dominant black which overwhelms the smaller slices of colour emphasising the importance of shape.

The various shapes have connections with Abstract Geometric Art and artists such as Ellsworth Kelly and Josef Albers as well as the sculptures of Henry Moore and Barbara Hepworth.