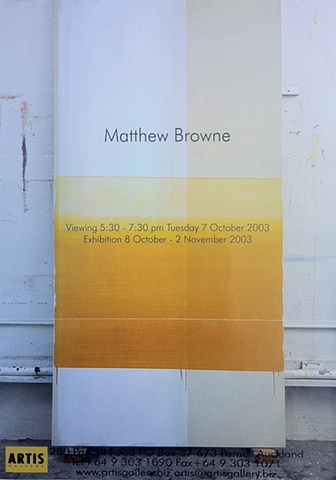 'A Measured Moment of Being'

Born out of 'Collective'- a series of watercolours exhibited in Auckland and Wellington in 2002, Browne’s recent technical and thematic concerns have focused on achieving the kind of fragility inherent in watercolour, in the otherwise dense robust medium of oils.

This new approach to a well-applied medium reflects Browne’s latest development in his continual exploration of how the artist might identify and represent visually the innermost and subtle, yet vital and powerful workings of the human being. “My paintings reflect my endeavours to make sense in visual terms of cerebral sensations, conscious and unconscious drives, and the complexities of the human condition,” Browne states. Long driven by a fascination for the underlying paradoxes that give shape to life – forms of presence and absence, of potency and vulnerability – Browne has once again created testaments to mortal elements such as power and fragility.

There is an increased intensity at work in these new paintings; a meditative stillness inspired by the watercolours but not seen before in Browne’s oil works. It comes as a result of not only the disappearance of the previous calligraphic marks, but also of the artist’s ever-firmer commitment to the essence of abstraction: to paintings being about the act of painting itself, and thereby speaking about life.

In so doing, Browne explicitly harks back to the Abstract Expressionists of the mid twentieth century – Barnet Newman, Jackson Pollock, Mark Rothko – celebrated for the grandeur with which they made their marks and the terrifyingly beautiful moment of individual confrontation that was inspired by those marks in the viewer.

Like the 1950s’ abstractions, Browne’s works have gotten bigger - many of them painted to, and greater than human scale - and invite an “encounter” with the viewer. Standing before them, we are beckoned (and/or repelled) to consider ourselves in the mirror-like vertical band, while the slightly tipped horizontal band provides an unsettling context, as a landscape in flux or a slightly askew window’s edge or doorframe might. Furthermore, and as is Browne’s forte, the (increasingly confrontational) combinations of colours serve to furnish our encounters with atmospheres from the unnerving to the sublime, and therein, often the provocative.

Those familiar with his work will note that increasingly in Browne, the quiet easily turns into disquiet, the simplicity into uncertainty, and the stillness into shrillness. For while relieving, there is also something obsessive in the search for a moment of “being here”; of Dasein. Indeed, seen as a whole, the new series suggests a long searching journey marked only by a row of asymmetrical crosses, readily interpreted as signs of emergency, location or spiritual transcendentalism.

What is thus communicated in these new works is both the transience of life, as well as our need to find “something to say,” to “put our mark down.” The bravery required to do that finds its expression in the works’ edgy beauty – born out of that tension between having laid down something poignant, only for that trace to disappear again.

While such ambivalence is represented most literally in the brushwork’s veiling effects, Browne’s larger inquiry into life’s fragility is expressed throughout the work; in the dynamic relationships between the colours, the tension between back and foregrounds, the juxtaposition of vertical against horizontal, and most definitively, in the self contained “dissections” of a measured moment of being.