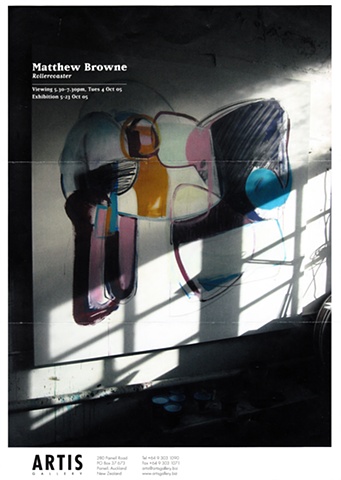 Earlier this year, after a studio hiatus, I returned to continue with a body of work that I had been focusing on for the past five years. I had ended 2004 having resolved a number of issues with this work, most particularly of a technical nature. I didn’t know it then but the delicate ‘veil’ paintings that were characteristic of this period, particularly since mid 2002, had reached a natural conclusion.

Whilst the ‘veil’ works clarified a clear and ongoing theoretical position for me, the balance had begun to shift increasingly towards addressing problems of technique and aesthetic concern. I learned much from these visually spare, elegant paintings but eventually a consistency of form and process brought about a sense of restlessness.

Painting has the potential to embody so much more than the sum of its visible parts. I realized that I needed to reintroduce chance and uncertainty as essential elements of my working methodology if I wanted to communicate anything of my concerns.

For some years I have been most interested in the complexities of the human condition and in the various levels of cerebral consciousness and sensation that strike such a delicate balance in order for us to exist and co-exist with one another. More importantly, I am of course searching for a metaphorical interpretation and translation of these concerns through visual means. I like to believe I am embracing Rudolf Arnheim’s, “Truly productive thinking takes place in the realms of imagery”.

This has resulted in a return once again to a working methodology that engages in the extremes of impulse and deliberation. Where the unknown quantity is seen as essential to the development of each individual painting.

So, I began to ‘pull’ imagery from my mind in a series of small works on archival matt board. Over a month I produced fifty mixed media works that I then culled back to comprise the ‘Re-Form’ series 1-28. Each of these works was approached using pencil or charcoal; somewhat rapidly at first to avoid over analysis and then with increasing deliberation as vinyl tempera, watercolour or oilstick was incorporated. I’m never sure of the result, what it represents exactly or how it came to be as it is. The process throws up a never-ending plethora of images; some that recall or remind and some that just are. They always surprise me. The larger works come from the same premise and are not directly informed by the smaller ones.

It is a momentarily tense introduction as I begin each piece, for I am painting blind and am unsure of what will follow. Each work begins as a tabula rasa (clear slate) and then over time an image and form appears. It is only when the work is nearing completion that I come anywhere near being able to title it, prompted by the forms and sensations revealed by the process.

Painting for me is not a way to describe or illustrate, at least not necessarily in any specific sense; I see it as a way of encouraging metaphorical and unknown images to materialize and thus as a potential carrier for our personal and collective unconscious histories.