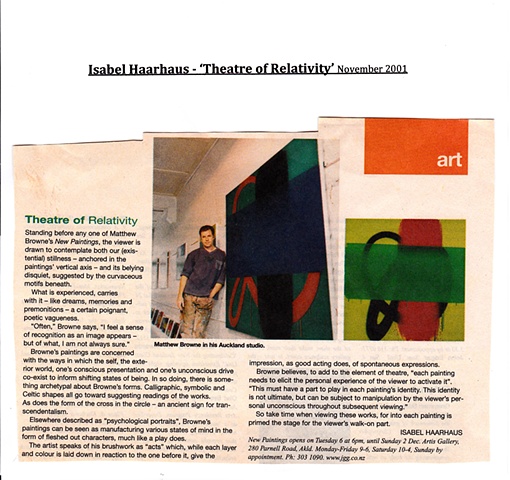 Standing before any one of Matthew Browne’s new paintings, the viewer is drawn to contemplate both our (existential) stillness – anchored in the paintings’ vertical axis – and its belying disquiet, suggested by the curvaceous motifs beneath. What is experienced carries with it – like dreams, memories and premonitions – a certain poignant, poetic vagueness. ‘Often,” Browne says, “ I feel a sense of recognitions an image appears – but of what, I am not always sure.”

Browne’s paintings are concerned with the ways in which the self, the exterior world, one’s conscious presentation and one’s unconscious drive co-exist to inform shifting states of being. In so doing, there is something archetypal about Browne’s forms. Calligraphic, symbolic and Celtic shapes all go toward suggesting readings of the works. As does the form of the cross in the circle – an ancient sign for transcendentalism.

Elsewhere described as ‘psychological portraits’, Browne’s paintings can be seen as manufacturing various states of mind in the form of fleshed out characters, much like a play does.

The artist speaks of his brushwork as ‘acts’ which, while each layer and colour is laid down in reaction to the one before it, give the impression, as good acting does, of spontaneous expressions. Browne believes, to add to the element of theatre, “Each painting needs to elicit the personal experience of the viewer to activate it”. “This must have apart to play in each painting’s identity. This identity is not ultimate, but can be subject to manipulation by the viewer’s personal unconscious throughout subsequent viewings”.

So take time when viewing these works, for into each painting is primed the stage for the viewer’s walk-on part.