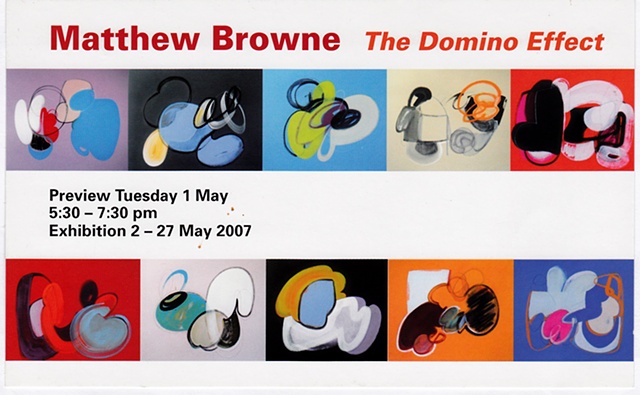 The apparent visual shift in my work over the past eighteen months has been the result of an extraordinarily productive period of reflection. I continue to be held captive to things of an uncertain and mysterious dimension. I am, as Paul Klee has suggested, a humble servant of the creative process.

I begin each piece of work knowing very little of the image that will eventually emerge. I rarely draw or pre-plan directly for paintings. Of course I do draw but the drawings are autonomous and exploratory; they stand-alone and provide me with a platform from which to spring when I paint.

In any event, I approach the process of both drawing and painting with some trepidation. When I am painting I invariably pace up and down the studio for some time before I begin. I remember Plato’s ‘The beginning is the most important part of the work’. I stare at the blank canvas and then run my fingertips across the surface in an attempt to ‘connect’ with the image. Sometimes the image is so illusive that I can barely begin. I take a pencil and gently feel the surface, trying to coax something out. Then, as the image emerges I work more confidently using vinyl tempera and oilstick to establish the form as it comes to me.

At other times I can feel the image rushing up behind me and I must work quickly and confidently with a more deliberate approach so as to fix the image before it disappears. On these occasions I often begin with loaded brush or oilstick, moving my hand decisively across the surface. Even then, I rarely know how things will turn out and it can be a tense game of hide and seek as cerebral sensations come and then go, throwing the painting into a state of flux as the image is repeatedly pulled in and out of focus.

These cerebral sensations form the essence of my painting practice. Though I am unaware of the work’s meaning at first inception, the biomorphic and organic forms that appear ultimately combine to suggest metaphorical images of definite matter.

They are my unconscious cognitive impulses tempered by considered thought and deliberation. For a painting to survive though, these forms must be located and identified; for without this they feel meaningless and empty. Titles follow and my part in the process is done.

The title of this ongoing body of work, 'The Domino Effect', refers to the consequences of action and re-action, a natural repercussion of cause and effect in life and of the painterly process itself.