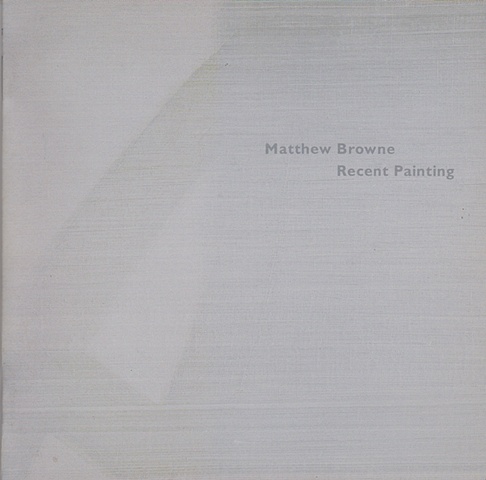 With what look like freehand marks, Matthew Browne's paintings generate a sense of being there; of Dasein. (1)

Standing before any one of these paintings, the viewer is locked into a complex project that brings us to notice both our (existential) stillness - anchored in the paintings' vertical axis - and its belying disquiet - suggested by the curvaceous motifs beneath.

While we contemplate aspects of relativity throughout our interaction with the paintings, Browne's marks function simultaneously as our point for departure, map and trace; Hosting while making manifest our explorations. What is thus experienced carries with it - like dreams, memories and premonitions - a certain poignant, poetic vagueness. "Often”, Browne says, "l feel a sense of recognition as an image appears - but of what, I am not always sure." (2)

Browne's paintings are concerned with the ways in which the Self, the exterior world, one's conscious presentation and one's unconscious drives co-exist at various moments to inform shifting states of being. ln so doing, there is something archetypal about Browne's forms.

Calligraphic, symbolic and Celtic shapes all go toward suggesting readings of the works. As does, intrinsically, the form of the cross in the circle - an ancient sign for transcendentalism. Furthermore, the marks themselves give a sense of continuity.

Browne is interested in the marks being continuous so as to convey a notion of the dynamic between the self-contained and the perpetual - he doesn't like to think of the marks as "on their way out." Each mark continues so as to contribute to the next. And while at times precarious, there is indeed an overall and arresting unity about Browne's paintings.

For Browne, "the degree of unity of the exterior world and myself and the degree of either separation or togetherness"(3) is suggested by the different layers of paint which, ranging in scale, colour and subsequent mood, combine and interact to create a vitality that in turn inspires a range of reactions from the viewer. Alternatively (or simultaneously), colours and lines may irritate or soothe; disparity of form may repel or stimulate; obscurity of subject may block, provoke or communicate. The sense of continuity locked within each painting is therefore, it seems, born of our own relative relationships to them.

Harbouring and periodically bringing to light the faintly yet deeply familiar, each painting perpetually changes so that our reading of it remains in constant anticipation, only ever momentarily forming any conclusions. What we notice is that while the tense interdependence of Browne's marks do make tight fists of containment, the individual parts - for example, our first point of contact, the slightly tipped horizontal and top layer of paint - acknowledge constantly the possibility that the whole thing might at any moment lose balance and turn the full circle or fall completely out-of-the-picture.

This element of precariousness goes toward exciting the paintings themselves while stimulating engagement in the viewer. Depending on the painting's relative formal and tonal (in) congruity, the vertical mark for example (with which we may strongly identify) - wedged in through the heart of the matter - dominates or recedes, fully affecting and, at times, effecting, our responses to the work.

It is this vertical mark which, like Barnet Newman's verticals, Mark Rothko's abyss' and Anselm Kiefer's Utopias, solicits most urgently the viewer's perspective and reflection.

Vividly bearing the spoor of its making and struggling to fill the frame (and therein everywhere human-like,) the vertical mark, or axis, draws attention to the arbitrary yet acute line of difference we draw between separation and togetherness, while reminding us that such a division can only ever be momentarily, shakily realised. Between separation and togetherness, the mark tells us, are infinite temporary states sparring for dominance in a manifold of possible situations.

Browne's paintings can thus be seen as manufacturing various states of mind in the form of fleshed out characters, much like a play does. lndeed, the artist speaks of his brushwork as "acts" which, while each layer and colour is laid down in reaction to the one before it, very much give the impression, as good acting does, of spontaneous expressions.

Sonorous, irritating, playful, apt or confrontational, the organic developments of these works is innate - primed into the process of their making and necessarily further driven by our responses to it. "Each painting needs to elicit the personal experience of the viewer to activate it," Browne tells us, "this must have a part to play in each painting's identity. This identity is not ultimate, but can be subject to manipulation by the viewer's personal unconscious throughout subsequent viewing." (4)

Moving between the rehearsed and the impromptu, these paintings are more or less controlled performances intent on exploring relationships between the anarchic, amorphous and unconscious and the disciplined, contained and conscious. ln this delicate theatre of relativity, "each layer is crucial to the whole. lf you take one layer away, the whole thing will fall apart." (5)

As such, the paintings enact both the trauma of separation and the harmony of togetherness. What is therein revealed is that Dasein is a vital state of varying continuity.

Notice then as the energy of line excites and disturbs, colours soothe and agitate, disparity of form stimulates and discomforts and obscurity of subject provokes and blocks off. For here are re-created traces of daily and lively truisms, woven into which are stages primed for the viewers' walk-on parts.