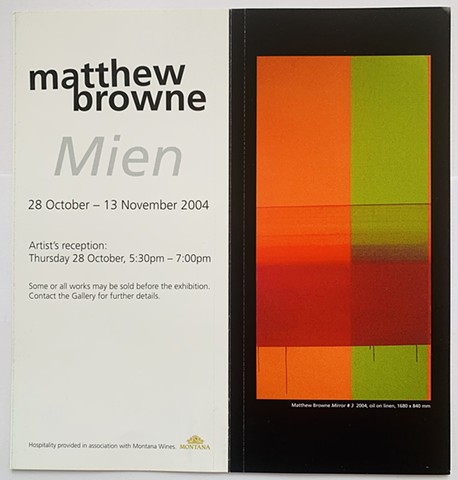 Mien - ['mEn]: air or bearing especially as expressive of attitude or personality The opportunity to visit an artist's studio is an interesting and somewhat privileged act. Although each experience is markedly different (dependent on a great many factors), it is a tremendous responsibility nonetheless. Typically regarded as sites of intense thought, imagination, and creativity, there are centuries of romanticised notions attached to the garret and the starving practitioner within.

While the concept of a struggling artist is not necessarily a true one, entering this 'sacred space' allows the visitor an unparalleled view of his or her process, if not always their mind.

Matthew Browne is an artist of the highest order, because a foray into his environment can elucidate an entry into both.

Browne operates in meticulous surroundings, in which paintings of intense colour and energy interact with the viewer. Although remarkably consistent in his stylistic approach, Browne's use of scale has differed over recent years. There has been a definite tendency towards larger canvases, however these are often tempered by smaller works that offer no less of an impact, but rather, a slightly condensed access into the picture plane.

In the current exhibition, he has used two formats, categorized by size, and titled accordingly. Like a cited influence, Mark Rothko, he allocates numbers to each series, leaving the audience no more than a suggestion of what they might be seeing. This does not mean to imply a lessening of content; to quote Rothko: " there is no such thing as a good painting about nothing. "

The first series of paintings are each entitled 'Mirror' - itself an object that invites contemplation, and is invalid (or at the very least incomplete) without it. On first viewing, one may see where solid blocks of colour meet, touch, and depart on a two-dimensional surface, and recall Clement Greenberg's theories regarding modernism and its ultimate reduction to flatness. Nevertheless, like a mirror, his works seek to offer more, in what the artist terms a 'seduction of surface', an apparent exterior sinks into a depth conveyed by washes of paint that slip between one layer and the next. At times, a veil of colour changes one tone to another, which alters both the mood and the dimension, and pulls the viewer's understanding from a static perception to a rhythmic journey.

Browne ensures an experience by requiring his audience to always look closer. The lines that seem to run parallel to one another and the works' perimeter do not align, nor do the brilliant hues he selects to sit together remain distinct from one another. The drips and dribbles that snake downwards leave a question as to whether these are intentional, or an accident in a painting that appears to be the antithesis of chance.

The second body of work is the 'Mien' series. While identical to its 'Mirror' counterparts in many ways, they are compacted and intensified, and the deliberation he requests is amplified by the role of colour, which is utterly prevalent.

Howard Hodgkin (who graduated from Camberwell College of Arts, as did Browne some thirty years later) is a strong influence on Browne's practice, and is quoted as saying: "I would like to paint pictures where people didn't care what anything was because they were so enveloped by them”. A colourist himself, he has also been aligned with the Intimism movement, and while Browne has moved away from the domestic and interior as a subject, he has retained the former as a primary concern. He is particularly interested in the 'enveloping' to which Hodgkin refers, but also our awareness of colour and intuitive reaction to it, especially at the first impression. The emotive response it garners is often unexplained, unexplainable or simply unexplored, as it relates to concepts developed before any memories the human mind can access.

It is believed that an infant distinguishes colour from the age of four months, so it is clear that our perceptions of it are formed before reason or emotion are rationalized or intentionally created. Often the first response is at the most basic of levels, and he is fascinated by the way that this unmediated instinct can modify over a period of time that can differ from mere moments, to hours or even days'

The individual often seeks to subconsciously 'correct' their view, for reasons such as perceived 'good taste', a partner's opinion, matters of decor, or a realization that this does not align with their sense of self.

Perception can be defined by looking either in or out. By melding the mien and the mirror, Browne asks us to examine ourselves, and then reflect on how others see us and the possibilities within. Yet we also have the benefit of watching the artist look back.