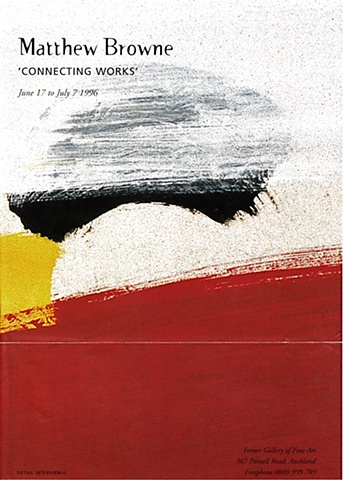 We have all experienced the disappointment which attends the realization that a photograph taken at an important and memorable occasion conveys only a small part of the experience of being there in person. At best a photograph serves as an aide-memoire, which helps us to evoke the fullness of the original experience.

Artists have long been aware of the inadequacies of conventional visual representation. We can look back on more than a century of expression by artists who have developed strategies that set out to record their experiences of the world in a more comprehensive way. It is in the light of such a tradition that Matthew Browne's paintings are best understood.

A reference to the titles of the paintings indicates that they are not disconnected from his everyday experience of the world, but are instead direct responses to the events that shape his daily existence. That they do not convey this in a conventionally recognisable way is because he sets out to go beyond what can be visually perceived in an attempt to encapsulate more fully the total experience as it impacts upon all his senses and faculties.

This approach is, of course, not without precedent. His studies at the Camberwell College of Arts in London during the 1980's brought him into close contact with the important British artists, most notably Ivon Hitchens and Howard Hodgkin through whom he connects with an historical tradition of European painting, which encompasses both Bonnard and Morandi.

Since his arrival in New Zealand five years ago he has moved away from these influences and developed a sparer, more disciplined inividual style which is, both in philosophy and practice, more akin to the work of certain American Abstract Expressionists like Franz Kline, Mark Rothko and Robert Motherwell.

While these sources underpin the general character of his work they remain at a remove because the scale and intention of these paintings is entirely more personal and intimate. His is not the broad gesture, the heroic scale and emotionally loaded content, but instead he evokes the subtle nuance and shifting moods of the Intimists. The world of everyday experience is observed and recorded with an eye for the telling essentials.

Titles like "Interview II", "Aspects of The Day" and "Bar Tab" indicate that Browne's themes are at once modest, personal and domestic. Devoid of irony, like entries in a diary, they mark the passage of a life lived with intelligence, passion and wit.

Browne has evolved a repertoire of brush strokes - marks which are distinctly his own and which are deployed with great variety and invention to evoke different moods and atmospheres. Coupled with this is a fine sense of lyrical colour which is never gratuitous in its effects. Strong, saturated hues are balanced with subtle finely judged tones in an ever-changing progression of shape and gesture. They touch, overlap, obliterate each other or float contiguously on a warm neutral ground. This ground is clearly more integral to the reading of the works than might at first be apparent. It is as if in the process of recalling the event the spaces represent details the artist, in retrospect, cannot account for. Rather than fabricate a seamless whole he signals the fallibility of memory and in so doing invites the viewer to participate by "reading between the lines" and bridging the gaps. In this process of negotiating a meaning, both the marks and the spaces become more telling and notable. That he is able to use such relatively humble means to convey such a range of expression is a tribute to his discipline, deliberation and understanding of his craft.

The principle of 'connection' implicit in 'Connecting Works', the collective title to this body of painting, is the key to locating both the artist and his practice and it allows us to clearly trace the creative process. It operates on a number of levels, beginning with the connection between the artist's lived experience and the memory of the event, proceeding to the connection between memory and what appears in the finished work. This idea can be further extended to the connection between the viewer, the canvas and the title in an ever-broadening context. At the same time, some of the larger works are connected by being more intimate explorations of areas selected from the smaller ones. The multiple panels are probably the most visible and obvious manifestation of connection.

Painting of this kind, which is mindful of its antecedents in a way that is currently unfashionable, should not be dismissed. Rather it should be viewed as a lyrical, complex celebration of every day life, which convinces with its unaffected candour and accomplishment.