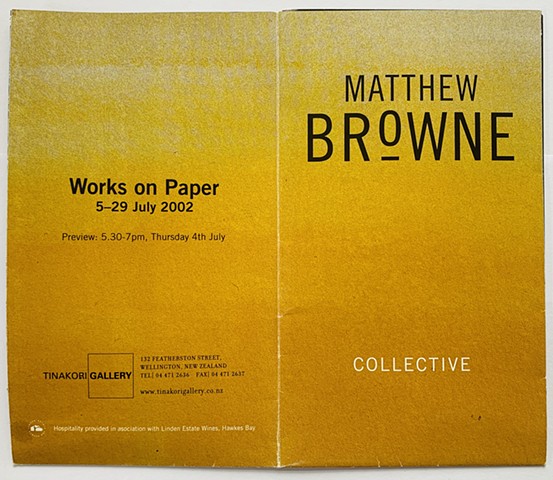 “The power of colour lies in it’s ability to transcend the intellect, even momentarily, to encourage a more primal response’.

During the last twenty years or so that Matthew Browne has worked as a committed painter, his natural talent to innovatively manipulate traditional material has been gradually honed into what is now an exceptional ability to create highly refined works that are remarkably, almost inescapably, engaging.

From initially figurative beginnings at Camberwell College of Arts in London, Browne’s approach to painting soon began moving in an abstract direction. He was drawn to examples set by British painters like Ivon Hitchens and Howard Hodgkin, artists who liberated paint from line by choosing to broadly apply it in expressive swathes, blobs or dots.

This modern, expressionist sort of approach emphasizes both the sensual and tactile qualities of the artist’s materials. Whether celebrating the inherent beauty of harmoniously manipulated colour or exploiting its capacity to jar with discordant contrast, the abstract painter seeks to unleash the potential of paint to generate an intense emotional response. It is the fundamental ‘act’ of painting, manipulating the material’s intensity, plasticity and transparency while exploring its reaction to the surface or grounds that it is applied to that become the artist’s primary concern.

That is not to say Browne’s works are without meaning; to the contrary in fact. All his paintings are conceived as manifestations of the artist’s emotional response to his experiences of the world. The subject therefore is a sub-conscious outpouring of his innermost feelings. Each painting conveys aspects of his relationships to others, some intimate, some not, as well as diary-like recordings of personal emotional assessment, all poetically encoded in richly rendered chromatic metaphor.

In recent years Browne’s unceasing search for what he described as “a painterly language that would convey my concerns”, an approach that was essentially abstract yet still highly personal and emotionally expressive, has delivered brilliant results. The intense development his work underwent during his Masters studies in the late 1990’s proved to be a watershed. Experimental archetypes eventually evolved into a form of symbolic psychological portraiture, a finely honed layering of gestural vertical sweeps over plains of solid colour that were then veiled with horizontal bands of varied width and transparency.

Now that a suitably eloquent form of expression has evolved, Brown’s emphasis has shifted from what he describes as “problems associated with fine tuning and nuance”. “It seems to me”, he noted, “that a language that appears to be a repetition of itself often yields the richest result and, given half a chance, offers the most sublime rewards”.

The format employed in these ‘Collective' - Works on Paper, is consistent throughout, yet the emotional temperature and intensity of individual woks varies enormously. Some appear quite simple yet all these paintings are actually quire constructively controlled – watercolour is a very unforgiving medium, most intolerant of mistakes or sudden changes of heart. As any painter will confirm, the hardest thing to achieve is to make it look effortless.

Colour is by its very nature a natural seducer. How the viewer reacts to its various presentations here depends entirely on the individual. These alluring works by Browne seductively invite a response from the viewer. The artist entices, tempts and challenges us to engage in a dialogue, the outcome of which may reveal more of our sub-conscious selves than we expect.