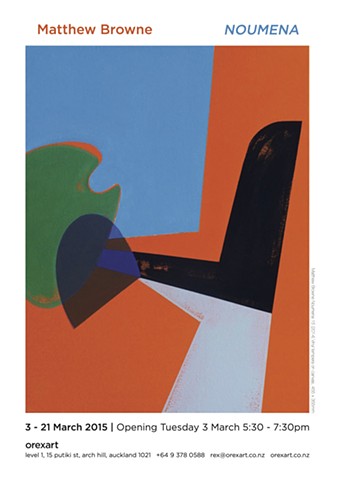 Noumenon (plural noumena), the existence particular to a thing, described by Immanuel Kant in 1796 as the thing-in-itself. This is the essential nature of a thing, as opposed to phenomenon: the thing as it appears to an observer.

Matthew Browne’s latest exhibition continues his fascination for the inaccessible essence of things. There is a lacuna, a cavity in our comprehension of something, and that is the experience of the thing itself. How can we preclude our human filters – senses, behaviours, cultural mores – to grasp the true nature of something without making it partly human?

Philosopher Giorgio Agamben suggests that one can approach the understanding of the impossible by listening to the lacuna, to “the non-language that one speaks when one is alone”1. True experience of the Other is unavailable; we can never penetrate to the noumenon, because our language colonises it. The closest we can attempt is to infer from the nature of experience, and catch ourselves before our thoughts crystalize and definitions bind.

Browne approaches the unknowable by creating an image that begins to reveal a presence of itself, an image in gestation: not fully formed, not fully realised by the viewer; the painting grows, unfolds itself before us. This kind of picture is a site of prompts that encourages us to study it as something elusive, a thing that can stimulate “those occasions in ordinary life when the us and the it slipslide into each other”2.

What are these pictures of? The artist himself doesn’t know. Although there is the suggestion of human form and habitation, it is not his intent to prescribe scenes or actions: it is our own human desire for recognition that makes forms out of the formless. These pictures are things-in-themselves. They leak information but deny our representational definitions. They tease with recognition and still resolutely remain paintings. To Browne, “for my paintings to survive they must be metaphors; they must try to make the noumenal world exist”3.

Although painting is a human construct, so old and laden with language that one may question its ability to be its own thing, painting is more slippery than that. Painting’s language is ambiguous enough to listen at the lacuna, to oscillate between the results of human action and to be a thing-in-itself; painting can bring us a glimpse of the Other.

Browne’s large painting Delphic attempts a bridge between our existence and another. The ancient Oracle at Delphi was a conduit with that which cannot be apprehended. She occupied the threshold of the human world and the inaccessible world of things – unexplained occurrences, the will of the Gods. She deciphered the unknown yet her answers were abstruse, giving mystery the familiarity of a human voice but presenting it opaque with metaphor. Browne’s paintings hover in this negotiated space, their essence inaccessible, yet they encourage us to listen at the lacuna, to think our way as close as possible to the thing-in-itself.