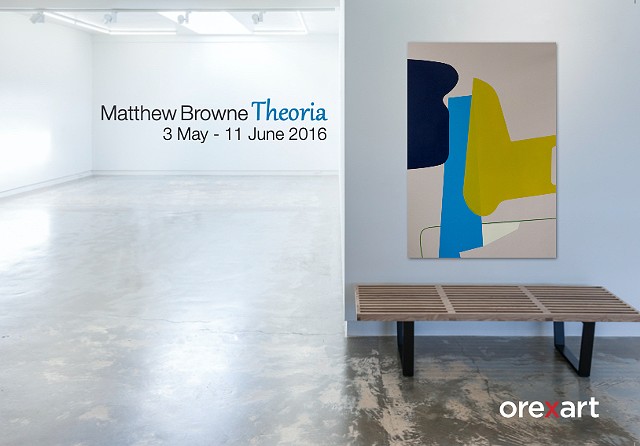 Theoria – the Greek word from which the English words theory and theatre are derived, meaning “contemplation, speculation, a looking at, things looked at” – is the title of Matthew Browne’s new show of paintings. As this and previous titles (Fantasmagoria, Noumena) indicate, Browne’s work has long been concerned with accessing and manifesting that which is mostly not quite knowable to the senses. The work asks, can we appreciate abstract ideas and realize them in a material sense, in the tradition of Greek philosophers Plato and Aristotle and their heirs, including Kant?

More specifically, Theoria #1-64 refers to 64 small paintings, while the large works carry individual titles, also Classical in their references to virtue, sophistication and wisdom. The large works are formal, imposing, carrying the weight of their meaning, doors to walk through, rooms to enter, embracing, welcoming, encouragement to wander and marvel. The framed works present themselves like mirrors or windows, to look into and through. They are both ideas and illuminations.

In all the works there is a strong suggestion of space, both inner and outer, areas to inhabit, contemplative and speculative. The spaces are constructed as an architectural juxtaposition of floating shapes, intersecting, colliding, over-lapping – like actors and their shadows. The combinations of colours are as surprising as a field of wildflowers: blues, yellows, oranges, and greens. There is order and chaos, harmony and discord, soft and hard-edged, shaded and in full sun.

The whole effect is enveloped, as in flattened boxes or origami. Forms merge, like lights on a stage as they move into new positions, attracting other players as if in a magnetic field, each trying to find their own realities, their own points of connection. The theatrical is played out in the occasional spotlight, the hint of human form and the promise of the whole thing folding out, running from the stage, returning to bask in the applause.