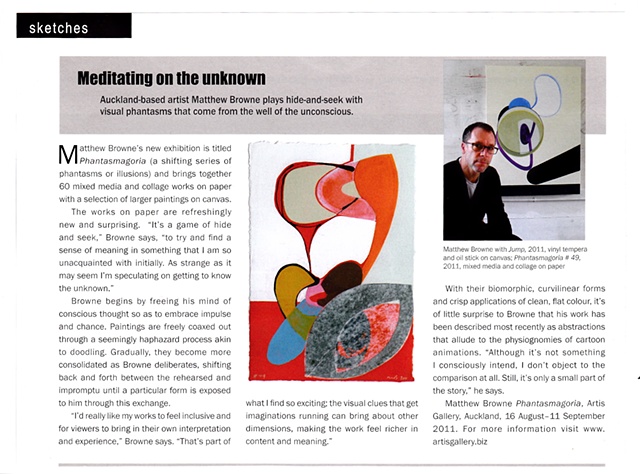 ‘Meditating on the Unknown’

Auckland based artist Matthew Browne plays hide and seek with visual phantasms that come from the well of the unconscious.

Matthew Browne’s new exhibition is entitled ‘Phantasmagoria’ (a shifting series of phantasms or illusions) and brings together 60 mixed media and collage works on paper with a selection of larger paintings on canvas.

The works on paper appear as an image that’s new and surprising. “It’s a game of hide and seek” Browne says, “to try and find a sense of meaning in something that I am so unacquainted with initially. As strange as it may seem I’m speculating on getting to know the unknown.”

Browne begins by freeing his mind of conscious thought so as to embrace impulse and chance. Paintings are freely coaxed out through a seemingly haphazard process akin to doodling. Gradually, they become more consolidated as Browne deliberates, shifting back and forth between the rehearsed and impromptu until a particular form is exposed to him through this exchange. “ I’d really like my works to feel inclusive and for viewers to bring in their own interpretation and experience” Browne says. “That’s part of what I find so exciting; the visual clues that get imaginations running can bring about other dimensions, making the work feel richer in content and meaning”.

With their biomorphic, curvilinear forms and crisp applications of clean, flat colour, it’s of little surprise to Browne that his work has been described most recently as abstractions that allude to the physiognomies of cartoon animations. “Although it’s not something I consciously intend, I don’t object to the comparison at all. Still, it’s only a small part of the story” he says. Matthew Browne ‘Phantasmagoria’ at Artis Gallery, Auckland from 16 August to 11 September 2011. For more information visit Artis Gallery