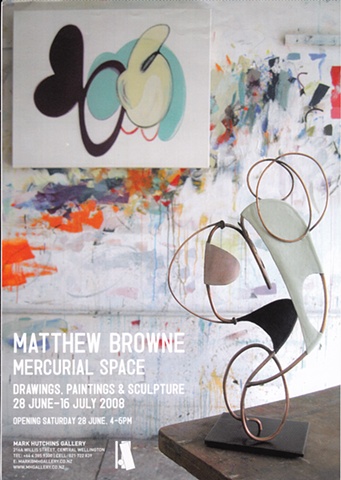 When I was 18 and in my first year at art school I momentarily toyed with the idea of specializing in sculpture rather than painting. The process that we were taught though, direct modeling in clay from the human form followed by casting in plaster, seemed so laborious and tedious that I soon lost interest. It didn’t seem to occur to me that there were other ways to sculpt, or maybe in the end I simply had my heart so firmly set on painting that I was blind to other sculpting processes. Whatever the case, painting is what I chose to pursue.

Over the years though, as my painting slowly developed, thoughts of sculpting have often been present. Then, mid way through 2007 building renovation work on my studio meant that painting was temporarily impossible. I looked around for alternative options and found the answer in a length of galvanized steel wire; circumstance and timing were perfect and sculpture suddenly became a reality.

I have written many times about my paintings and now for the first time it seemed that the same theoretical ideas could be applied to the three dimensional process. Painting as I see it, involves in part a trompe l’oeil approach to the relationships of form and space to subject. A painter works in two dimensions but invariably cannot help but consider three dimensions. Space, light, form and colour can be controlled and manipulated to achieve a work that is autonomous, consistently still and relatively unchanging. Sculpture manipulates actual three-dimensional form that is dependent on light to reveal it. The light changes, the form shifts and the space consistently moves, contracts and expands. Leonardo Da Vinci explains this most succinctly when he says: “Sculpture is dependent on certain lights, namely those from above, while a picture carries everywhere with it its own light and shade”.

In my practice the materials and methodologies within both disciplines, though quite different, are held at their source by a consistent theoretical positioning. Every work, whether painting or sculpture, is essentially a reflection of my cognitive unconscious impulses tempered by considered thought and deliberation. An image appears from a void and though broadly these forms relate to one another, rarely do they do this directly.

I don’t see my work as a way to describe or illustrate, at least not in a consciously specific sense. They are the exposing of things mysterious and previously unknown. Unconsciously however, metaphorical images materialize before me and over time something very clearly identifiable becomes apparent.