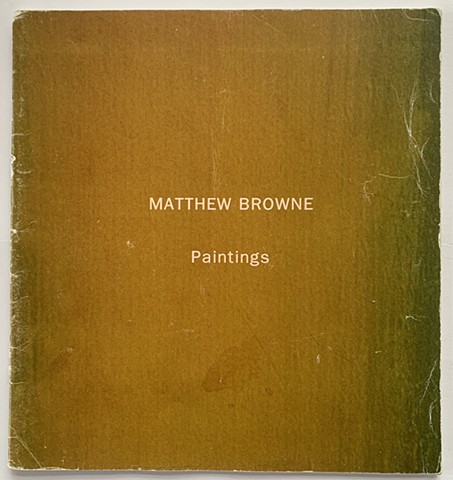 Catalogue contributions for the final assessment of the individual MFA programme at Elam School of Fine Art - University of Auckland 1999. Contributors:

'Hide and Seek'- Jeremy Younger Artists are in the business of not keeping secrets - risking what's hidden in the paint as they squeeze it out.

We all love secrets. They are best when we're telling them or hearing them. When they are just secrets, packed away and silent, they are quite without interest. That's why we so often just forget we ever knew them.

But it doesn't just stop there, this process of hiding our unacceptable, fascinating- selves! In our dreams and jokes and free associations and slips of the tongue (and even in our paintings?) we surprise ourselves, as some of those secrets which we so successfully forgot were there, insist on jumping out and startling us with the energy of an irrepressible jack-in-the-box.

Of course they often come wrapped up in code and metaphor and magic, but nonetheless they come, and when they do they are demanding. They demand our attention and they are always uncomfortable and difficult.

Children have always known better than adults about this. They have known the don't play hide and seek to stay hidden and win, but so they can be found and lose. They even make sure they tap gently and breathe heavily in case they get overlooked in that dark cupboard under the stairs!

We adults, of course would like to think of ourselves as more sophisticated, but we too are constantly giving out clues so we can be found even if it means the risk of losing. It may be scary but, as all young children and bungy jumpers know, scaring yourself can be great fun.

Artists cannot avoid scaring themselves - standing as they do before an empty canvas to receive the unwanted gifts of the unconscious. They work in its world. It is a form of acting out. The most internal, most intimate, most hidden, most forgotten, becomes (encoded on the canvas on the wall) the most open, most naked, most revealing, most confusing. Psychoanalysis on canvas! - an ongoing dialogue that we have to have. We don't know why, but we know it mustn't stop.

This is what this conversation is all about: the canvas on the wall. This is the knowledge the artist wants us to consider. The truth that the unconscious offers us in secrets unpacked is always unwelcome, and it is unwelcome because it does not depend on the artist or the artist's will or wishes. There is no control here, neither safety nor subterfuge. The artist can neither tell the truth nor lie. All there is to do is wait to be surprised or shocked. And the clues to the unconscious are always enigmatic - all we can do is notice them and then, with fingers crossed, attempt interpretation. We are intrigued and foolish enough to believe that as the unconscious is revealed, as it unravels itself, something gets transformed from being unacceptable into something puzzling, and if we stay long enough and brave enough with the puzzle, if we stand before the canvas and just wait, we may just recognize and understand hints of what we know we've always known.

This is secret work, a private work, and yet the artist invites us in. So there's a crowd in front of the canvas. Is the private made safe with this acting out? For acting out is the black sheep of psychoanalysis. It is the establishment of resistance - it is the putting of the foot against the door to keep it closed so the pushy door-to-door salesman can't get in and con us. But that's not how it looks!

The artist shares the clues to his or her unconscious on canvas because of the need to survive. Interpreting the clues seems impossible or hard or dodgy or frightening and perhaps, if they are shared, the artist can be helped to know or saved from having to know. After all we tell our hidden truths because we do not know them or know them only too well. The telling is made more important than the content to keep us safe or to give us further clues. The question becomes not what does this mean, but what does the telling of this mean?

Perhaps all art is acting out! And if acting out is always about the transference of the past into the present what of the past lurks here? Is it the artist's past alone or ours as well? Whose unconscious are we dealing with?

Here we have it. The truth is not static, nor can it be contained. It is neither you nor I. It is the dynamic flow of languages and dialects, slippage of paint on canvas. Here we can talk and wonder. We stand before the canvas in conversation. This is the gestalt of conscious and unconscious, the movement between here and hidden, between found and foreground.

So for this moment we can meet each other in this common space and lurch together to and fro between the familiar and the unknown. Is it easier to rest on the surface, content in solid, dull deluding safety, or do we peer around edges, risk seeing what lies below, behind?

Reference, (not) deference to the past, Cast in the present; into the future.

The limitations of form and material give freedom of expression, Speak to the everyday and invoke the universal.

The exactness and care of the sweeping gesture.

To balance these contradictions is to essentially conform to the requirements of improvisation. A soliloquy delivered in a play must, although memorised from a written script, have become so well integrated in all of these things that, by the day of performance, it becomes an improvisational experience for both actor and audience.

The audience is touched , not by the 'wow' of how much work has gone in to the piece, but by the journey on which they are taken. The transformation occurs in the real-time of absorbing and (yes) enjoying the creative expression of another.

The act itself appears too easy: "If only I'd thought of that!" "My three year old could do that!". The cliched protest speaks of the success of the artist in rendering from their work, the simple and the obvious. Yes your child probably does do that most days; through play and unselfconscious learning. "Whatever meaning there is arises exclusively from the immediate, unique and unrepeatable context...this situation means at the same time the end of idealism and realism. The world is not seen as fixed, or as found; whatever realities mqy present themselves are considered to be versions of a world of worlds in the making."